Building with a Full Deck? (Response to CMP, part 7)

This post is part of a series responding to C. Michael Patton’s eight-part series at Parchment and Pen “Why I am Not Charismatic,” which is also conveniently available for download as a single e-book here. This is in response to part seven. 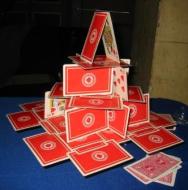 You admit to a history of deep-seated emotional bias against Continuationism (against Charismaticism,  really), but you insist you are all over that now.

You have weighed the Cessationists’ Scriptural arguments in the balance and found them wanting, correctly, I’d say.

You then offer up a subjective consideration of your personal experience, informed my some dubious expectations and shaky definitions.

You top this off with an argument from ignorance, based on selective evidence, ignoring contrary data, and out of all possible explanations you opt for the one that by an odd coincidence happens to correspond to your long-abandoned bias.  Go figure.

So, having laid a foundation such as this, you are now ready to build, it seems.

I don’t know, though.  At this point you loop back to some of the Scriptural arguments you previously said were underwhelming.  What, had they been pumping iron in the mean time?

Just a few points in reaction:

1.  That whole “supernatural sign gifts” thing.  Not to repeat myself, but as I explain here, I really do call into question how valid that category is scripturally.  You post a chart in your part one, and then proceed to assume this concept for the duration of your series, but you never really derive it from the Bible.  Yet it controls your entire definition of “Cessationist.”

You understand, don’t you, that the fact that you choose to define Cessationism in terms of the sign gifts, doesn’t mean that Continuationism does or should.  I think Cessationism is wrong in part because the concept of “sign gifts” itself is spurious.

Spiritual gifts in general are said to be God’s co-testimony to the gospel (Heb. 2:4).  So which ones are not “sign gifts”?

2.  You make a statement: “Everyone would agree that the work of Christ is not repeated over and over.” Well, yes, if what you mean is the finished work of Christ, His unique redemptive work.  However, you have here stumbled onto what I think is the main point you have missed all along.  In another aspect of Christ’s work, it certainly does continue—if you believe what Jesus says about it:

a. What you say about “sign gifts” Jesus says about His works: they confirm His words and help to build faith.

b. “Whoever believes” in Jesus will do these same works.

Jesus does not suggest that this is the only reason the believer is to do these works.  In fact we would do them as He did them:  because they are the Fathers’ works (v. 10b).  And this is the fruit that brings Him glory (14:13; 15:8).  When does that purpose get exhausted?

3.  You say you don’t find compelling evidence that all this continues. Well, that “whoever” in v. 12 does seem to me to indicate continuation through this age.  Does it not to you?  What about when Jesus brings this subject up again, saying that the power given through the Holy Spirit was for testimony “to the end of the earth”?  And if the power to do His works was because God was with Him (Acts 10:38), what could it mean for Christ to promise to be with us to the “end of the age” (Matt. 28:20). End of the earth, end of the age, does that sound like two generations?

4. You use the “no longer any need” argument.  Whose “need” do you have in mind?  If you are talking about God, “need” is not a relevant category.  God does not act out of necessity or need, but because He has willed, and according to His plan.  And if we believe Jesus’ words, it is a matter of God’s plan and His will that believers are to do the same works that He did.

On the other hand, if you are talking about our need, Jesus says—of this very subject—that without Him we can do nothing (John 15:5).  God’s need is 0%; our need for the empowerment of the Holy Spirit to do the works of Jesus is 100%.

“The signs of a true apostle were performed among you with utmost patience, with signs and wonders and mighty works.”

Now I think it is likely that the first use of “signs” here does not mean “miracles,” but simply “indications” (as the NIV takes it: “The things that mark an apostle…”).  But no matter, because we still have clear reference to “signs and wonders and mighty works.”

It is not surprising that apostles would be marked out by, among other qualities, their wonder-working power.  I think they probably performed the works of Christ in fullness, that in others we would think of as individual gifts.  We know it was not only the apostles through whom these acts of power were manifested (Acts 6:8). At any rate, however, Jesus’ words are pretty clear: “whoever believes in me will also do the works that I do.”  Limit this “whoever” as much as you like, considering the way Jesus uses the phrase (ὁ πιστεύων εἰς ἐμὲ) throughout the Gospel of John, and these are not including the variations on the wording:

Jesus said to them, “I am the bread of life; whoever comes to me shall not hunger, and whoever believes in me shall never thirst. (John 6:35)

Whoever believes in me, as the Scripture has said, ‘Out of his heart will flow rivers of living water. (John 7:38)

Jesus said to her, “I am the resurrection and the life.  Whoever believes in me, though he die, yet shall he live (John 11:25).

And Jesus cried out and said, “Whoever believes in me, believes not in me but in him who sent me (John 12:44).

6. Draw what implications you will from Eph. 2:19-22: “built on the foundation of the apostles and prophets” (v. 20), but the whole building, not just the foundation is the “into a dwelling place for God by the Spirit” (v. 22).  This takes us right back to one of the major themes of John 14-16, God dwells in the believer through the Spirit in order to bring forth His works:

Do you not believe that I am in the Father and the Father is in me? The words that I say to you I do not speak on my own authority, but the Father who dwells in me does his works. (14:10).

Jesus answered him, “If anyone loves me, he will keep my word, and my Father will love him, and we will come to him and make our home with him.”  (14:23)

I am the vine; you are the branches. Whoever abides in me and I in him, he it is that bears much fruit, for apart from me you can do nothing. (15:5)

If you abide in me, and my words abide in you, ask whatever you wish, and it will be done for you.  By this my Father is glorified, that you bear much fruit and so prove to be my disciples. (15:7-8).

7.  Finally, you resort to Heb. 2:3-4.  Again, I have dealt with this passage at some length (here), but there are a few remarks that need to be made about your citation:

a. You make a point of saying the gospel was confirmed “to them,” but not “by them.”  Apart from the fact that the author asserts the former, though not the latter, he is talking to people who are unconvinced of the gospel,  those in danger of “drifting away” (v. 1), of “neglecting so great a salvation” (v. 3).  Jesus said those with faith in Him would do His works.  Are we somehow surprised if those lacking faith do not?

b. Recall that what is being said here is in regard to “gifts of the Holy Spirit” (v. 4) in general, not some subcategory of “supernatural sign gifts.”

c. I have to question your use of “seems,”  which apparently serves in lieu of actual logic:

“This seems to indicate once again that the supernatural gifts primarily served a confirmatory purpose, not simply a benevolent purpose.  (emphasis mine)

“It also… seems to suggest that these confirmatory gifts were already beginning to exhaust their purpose.”

None of these statements are at all indicated by the passage.  As Jesus Himself said, the works He did back up His words, but these were not their main purpose, which was to glorify His Father.  The author here makes the same point: believe the words, or at least believe because of the works.  There is no indication whatever in the author’s words that the works Jesus prophesied and promised were not continuing and were not to continue.

2 responses to “Building with a Full Deck? (Response to CMP, part 7)”